by Olav Soldal and Jakob Schram; translated by Sara Stachelhaus

After a successful week in The Hague, in a project collaboration between Norwegian and European youth, we have seen European cooperation in practice and experienced how circular economy is turned into reality on the continent.

Between 20 – 25 November, a dedicated and ambitious delegation from JEF Nederland and from our Norwegian sister organization European Youth met for a project on the circular economy in Europe. After one year of cross-border planning, we finally came together in The Hague for a week of joint learning and proposal drafting.

The aim of the project was to gather youth from all over the continent to work together towards a common goal of understanding what circular economy means in Europe today. “Circular economy” is a frequently used word among politicians, but few understand what it is about in practice. The Netherlands is one of the countries in Europe that has come furthest in defining this and the government, local authorities and the business community have already taken several steps towards a more circular economy.

In 2015, the European Commission adopted an ambitious circular economy package with proposals for a number of measures under both financial, climate, energy, waste and business policy. Circular economy is an important political goal if one is to ensure the sustainability of the European economy and reach the high goals set in the Paris agreement. The EU is already leading the fight for cleaner air and sustainable ecosystems, but when it comes to resource use, the EU has still way to go. The resource intensity, that is, natural resources consumed per capita, is very high and the average European produces annually 481kg of garbage and about 275kg of this goes straight to the landfill (2013 figures from Eurostat). This leads to large resource losses, waste of energy and pollution of nature. Moreover, the earth is running out of more important raw materials and minerals, and it is therefore increasingly important to take care of the resources we have. 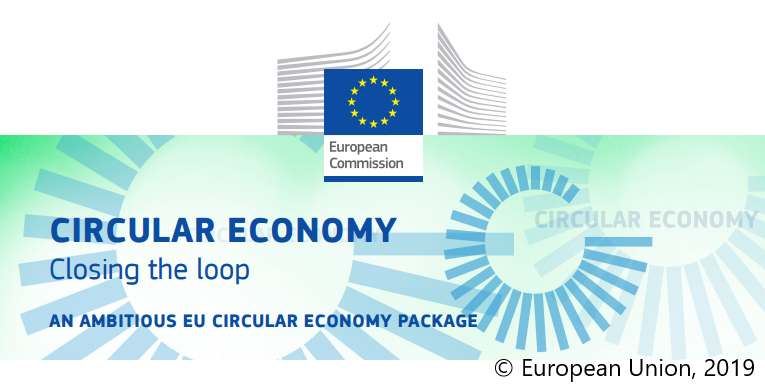 It was a tightly packed program. The first day went to introduce the participants to the project, project team and JEF as an organization. For the latter, we were honored with the visit of the president of JEF Europe, Chris Glück from Germany. He told us about JEFs work across the continent and what it means to be a federalist today.

The second day we went directly to Rotterdam for a field visit at Blue City. Blue City is an exciting business cluster for start-up companies that work with circular economy projects. The resounding premises are a closed swimming pool, which went bankrupt in the aftermath of the financial crisis in 2008. Since then, more than 100 organizations and companies have been based in the premises and a close cooperation environment has been developed for start-ups there. We learned about some of the projects, their visions and how they work with circular economics at a practical level.

Later in the day we went to Rotterdam harbor, Europe’s largest trade hub and a large industrial player in the Netherlands. There we were told about what the harbor is doing to renew, prepare for the effects of climate change and what measures they will implement for a greener shipping industry. In the evening, we were visited by a Dutch politician from the government party D66, who has worked on the topic long before circular economy became a buzzword. He is also an advisor in a couple of circular construction projects in the city of Delft and has written several books.

Thursday was a bit calmer and set off to dive deeper into the topics of Circular Economy and European Cooperation. We received two presentations and held a small debate on the pros and cons of having a common environmental policy at European level. Then there was some time for sightseeing in The Hague center, before met at the university for a seminar from Leiden-Delft-Rotterdam Center for Sustainability. We were met by an entire research team who each held their own presentations on their latest research. Everyone researches something related to the circular economy, but in each of their areas.

On Friday we left early for Amsterdam. The first stop was a visit to the major international chemical manufacturer ILC Group. They make fertilizer for the whole world. One of their projects is called Polystereen Loop, which is about being able to re-use the element in an insulation material called Polystereen. Then we went straight to a newly started, nonprofit business that recovers old, broken phones, mainly from Africa. Closing the Loop, as they are called, has collected several tons of phones and sent it for recycling at a plant in Belgium.

Our last visit went to an old industrial park in northern Amsterdam that was closed down in the 90s. Here, the ground is so polluted that no one can live or build at ground level. This organization De Ceuvel has solved by building a kind of floating office space. The concept is that all the offices are built out of an old and worn-out hull from a ship. These are then hoisted up to the ground level, along the quay and are scattered across the area. All raw materials and materials in the area are reused, and even the electricity is internally generated. The food is exclusively produced locally, and if they eat meat it is from geese that have been shot due to air safety at the airport close by. Almost all the organizations that rent office space that run circular economy and one of them is the very well-known think tank Metabolic.

Saturday, we spent summing up the week, reflecting on what we had experienced, and we started writing the project report. Many highlights from this week of learning were enough to see the different approaches to the circular economy. There are many projects in progress, and the Netherlands has come a long way in designing a functioning framework for the circular economy, but each organization is different in relation to the issue. If you are a big business, like ILC or Rotterdam port, you have a more general and business approach. If you are a small start-up, like Closing the Loop, you have a more practical and down-to-earth approach. The common denominator is that they see the role of the circular economy for our society and that they work across national borders.

All in all, this project has given us a lot of experience with project work and a deeper insight into issues for the business community in the transition to a circular economy in Europe. It has also given us an increased understanding of the cohesion that exists in Europe, and how important this can be to bring about change. The circular economy starts in Europe!

Thanks to all the project participants and partners. We would also like to thank ERASMUS + Aktiv Ungdom for financial and administrative support. If you want to hear more about the project, you can contact: vicepresident.jefnl@jef.eu.