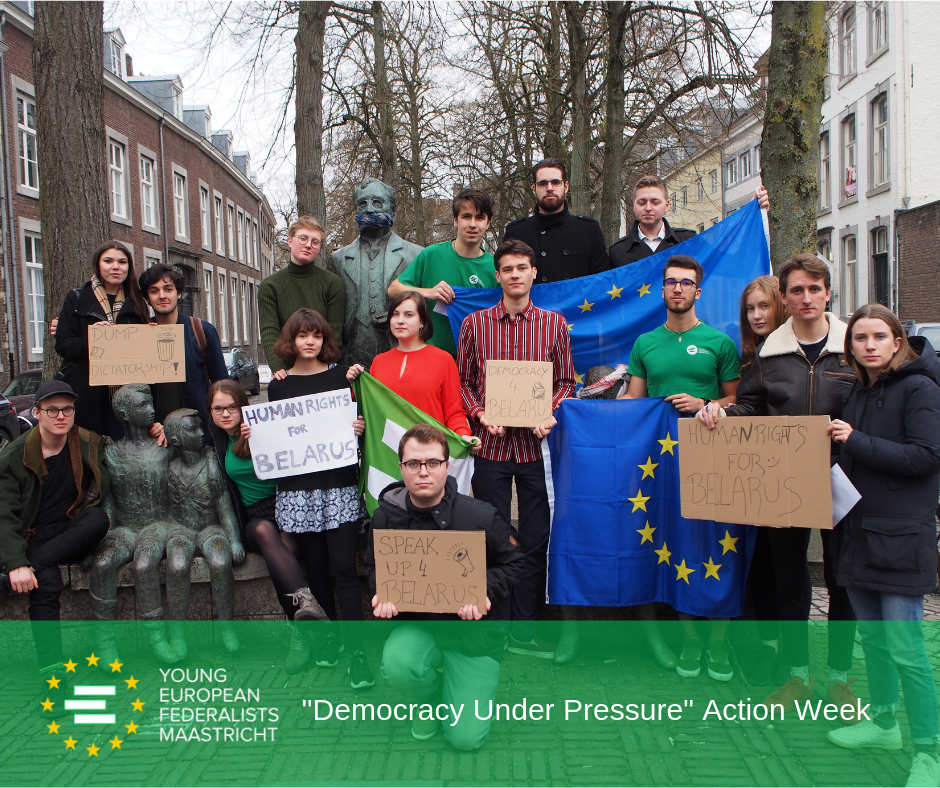 In order to raise awareness on the neglection of human rights and civil rights in Belarus, JEF Maastricht organised an information evening and a street action within the “Democracy under Pressure 2019” campaign which takes place in many European cities in the week of 18 – 24 February 2019. Under the motto “Speak up for those who are silenced”, the association invited Maastricht’s students to get informed about the state of democracy and the state of freedom in Belarus on the evening of 19 February 2019 in the Inner City Library of Maastricht University. There, the Belarusian situation could be seen through the perspectives of NGOs, EU institutions, and the resolutions adopted by JEF Europe; allowing the participants to form an educated opinion.

“The radical suppression of the freedom of speech and the freedom of assembly in Belarus is a severe concern to us,” states Thilo Buchholz, President of JEF Maastricht. “When citizens are silenced and cannot openly debate their government or contribute to the political discourse, this asks for us to raise our voice.”

Such an action in the public space followed on 21 February: The solidarity expressed by JEF Maastricht has been brought to the streets at the statue of Fons Olterdissen, a famous local poet and writer. As part of the protest, the statue had been gagged and symbolically silenced. “Art can serve as a great medium of public political expression and discourse. Through gagging the statue, we want to send a reminder to Maastricht: That the freedom which we citizens, and also artists enjoy is unfortunately still a privilege – and that the struggle for a free and democratic Europe with respect for the rule of law is far from over.”, continues Buchholz.

About “Democracy under Pressure”

The “Democracy under Pressure” week is a yearly campaign organised by sections of the Young European Federalists (JEF) in many cities all across Europe. Throughout the week, the sections raise awareness on the alarming trend of growing disrespect for the values of rule and law and democracy within Europe and the European Union.

The Young European Federalists (JEF) Maastricht is a local branch of the Young European Federalists (JEF) Europe, a non-partisan youth NGO active with 13.000 members in more than 30 countries. The organisation strives towards a federal Europe based on the principles of democracy and subsidiarity as well as respect for human rights. JEF promotes true European and works towards more active participation of young people in democratic life. Its sections have been operating continuously since the end of the Second World War, making it the oldest pro-European and only federalist youth organisation.